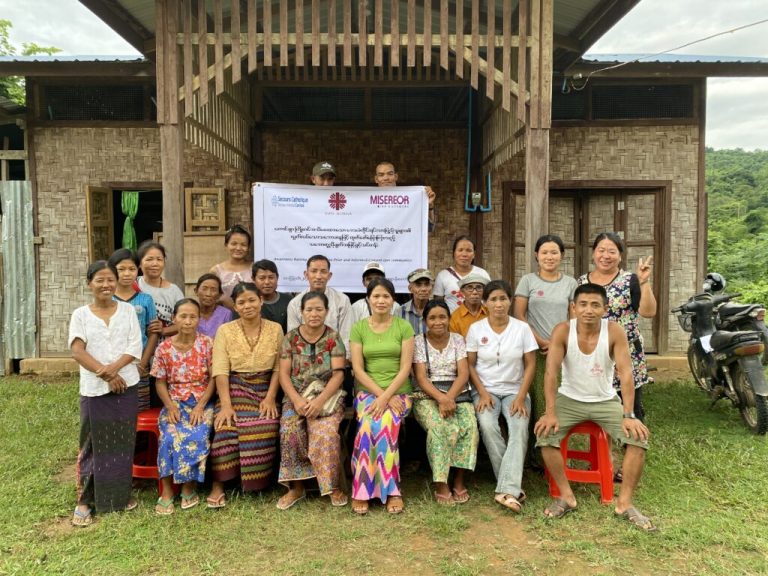 As we prepare to mark the Vatican’s World Day of Migrants and Refugees on 27th September, Fr Michael Tang Gun from Caritas Myanmar/KMSS* tells us about their project to resettle the internally displaced people (IDPs) who have lived for years in camps in Kachin State.

Many displaced people in Kachin State in Myanmar have lost the lands they left because of conflict in the area. But these people yearn to leave the camps where they have been living for years. They want to go home to build a future in their land of origin.

After 17 years of a ceasefire agreement, conflict reignited in the state between the Government of Myanmar and the Kachin Independence Army (KIA) in June 2011. As a result, over 120,000 people remain displaced throughout Kachin and Northern Shan State. Around 110,000 of these people are living in 167 IDP camps.

It’s only now, almost ten years later that Caritas can help Kachin IDP communities to go home to reclaim their lands in a sustainable way. But years of displacement have caused people to lose their assets overtime such as their land, homes and tools.  As a result, their livelihoods have been compromised and thus, they live perpetually in poverty and frustration and harbour unrealised potential.

In the first phase of the project, we will help people understand land rights and support them in getting back to their land. Caritas will also help returnees to build houses, as well as restore and improve community-initiated sustainable livelihood opportunities for the community in Banmaw.

Connecting up with markets

This approach enables the farmers and landless households to connect with markets offering sustainable prices. There will also be a focus on ecologically-friendly food production by means of sustainable consumption. The project will link farming communities and their products to market opportunities through capacity building, community mobilisation meetings and educational demonstrations.

In the course of 3 years, approximately 1238 households and over 4848 people will directly receive livelihood support through this project.  Those to benefit from the programme will be 60% female and 40% male. A proportion of the people chosen will belong to vulnerable groups.

Caritas Myanmar has been facilitating return and working towards resettlement in Kachin State since 2016. Our focus is on justice, self-reliance and the entitlement of culture and rights.  We want to see communities where people who return flourish socially, economically and spiritually. To do this, we promote peacebuilding at the community and national levels.

At Caritas, we don’t want to see a mindset of dependency among the displaced. We believe in a people-led planning approach. It’s with the advice of the people we serve that we promote the peaceful evolution of their families and communities.

As Bishop Raymond Sumlut Gam, the chairman of Caritas Myanmar, says, “God created everyone in the image of god. We need to protect the land and promote the dignity of every member of the human family.”