As Banmaw has been immediately promoted to a new Diocese and a new Bishop has been very immediately installed the 11 existing priests were being very strongly challenged with many responsibilities. The very first move of the bishop was the establishment of Diocesan Curia which will take care of the pastoral affaires and the establishment of Caritas Banmaw to take care of all the social development affairs.

Banmaw diocesan Curia office has been entrusted to Rev.Fr. Stephen Lau Mun    ( VG ) and I, Fr. Paul Lahpai Awng Dang, has been appointed as a director of Caritas Banmaw.

Location of the Banmaw Diocese. 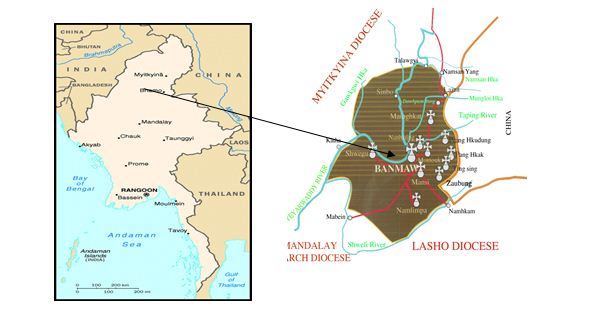 The greater part of the diocese is mountainous area with communication difficult. The Ayeyarwaddy, the main river of the country flows through the western part of the region, north to south providing water resources and means of transport and irrigation.

Karuna Myanmar Social Services (KMSS) is a faith based social network at the service of the Catholic Church.  Inspired by the Catholic Social Teaching Principle of “Option for the Poor.” Karuna Mission Social Solidarity-Banmaw (KMSS-Banmaw) is mandated and established in 18th April 2007 by His Excellency Bishop Raymond Sumlut Gam, Local Ordinary of Banmaw Diocese as its social arm to serve the poor and the needy.   The specific areas of the Church’s mission give attention to holistic human development, realization of Justice and Peace, environmental protection, humanitarian assistance and emergency relief services.

Karuna Mission Social Solidarity-Banmaw (KMSS-Banmaw) is a Catholic Church Organization  and working in 4 townships in Banmaw District. KMSS-Banmaw is at the service of all the people regardless of race, color, religion and locality. Starting from 2016 Karuna Mission Social Solidarity-Banmaw (KMSS-Banmaw) has two major programs namely Humanitarian program and Development program. In humanitarian program, KMSS-Banmaw is working for Internally displaced people(IDPs) such as food support, shelter construction, shelter maintenance, support for camp running and camp management, assistance for person with specific needs, support for water and sanitation (WASH), community-based responses to Gender Based Violence, and house repair and reconstruction, pastoral and social trainings for children, women and youth who are voluntarily returnees from IDP camps to their villages. In development program, we are doing livelihood program, education program, child protection project, mine risk education project, civic and peace education project for the poor people in the Diocese and the returnees from IDP camps. Currently KMSS-Banmaw is operating its program with 80 committed staffs in all operation fields. KMSS has deep roots in the project area that has resulted in acceptance in the target operational area that is ensuring safety and security.

KMSS benefits from a high level of recognition amongst the local population and with both parties to the conflict – the KIO/KIA in the NGCAs, and the local authorities and Myanmar armed forces in the GCAs. This high level of acceptance, along with an explicit commitment to the humanitarian principles of independence, neutrality and impartiality, forms a key component of KMSS’s security strategy in Kachin and Northern Shan States, enabling the staff to move freely between the GCAs and NGCAs to deliver humanitarian relief in areas few other organisations can access.